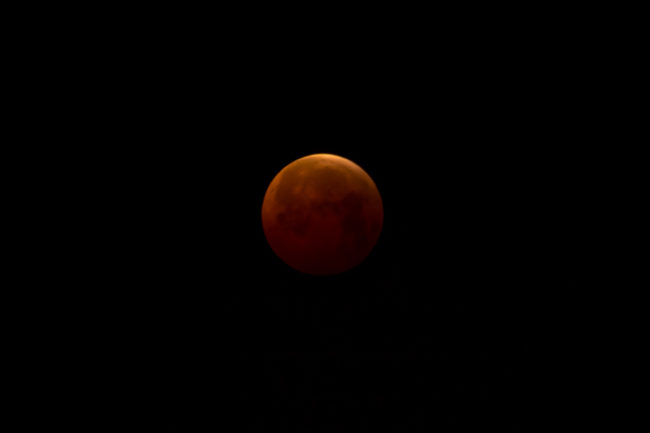 A date with the red moon.

Moon charmed human being from the dawn of time, so close and so untouchable at the same time.

Eclipse is expected at around half past five and I’m undecided if to wake up that early or not.

While the evening runs late an old Italian swing song pops out in my mind “I have a date with the moon, at 9 o’clock outside the city” so I decide to not miss that appointment.

On time, as an alarm clock is, I wake up at 4.40 under the music of my phone. Even if I’m still sleepy I know that most of good pictures are taken in pretty uncomfortable hours.

It’s already out there but it’s disappearing behind the buildings. I really have to go to that appointment as the song says, “outside the city”.

Night before dawn is my magical moment in a day. The city still sleeps and it is strangely silent. Only birds break that silence with their chirping.

While driving towards the outskirts, the moon it’s like a dark disk. It looks disturbing. The eclipse is now completed.

When my camera is ready the mist that was covering the moon dissolves and, in that moment, it gets charmingly red.

Another old song of from the fifties comes into my mind “the red moon speaks to me about you and I ask, is she waiting for me? The moon replies to me ‘if you want to know there is nobody here’ ”.

The upper part of the moon starts shining again and brightly, the view is amazing. It seems to be into a Star Wars movie. The light grows while the still obscured part gets darker, almost black.

I cannot stop admiring this natural marvellous spectacle till the moment in which the moon disappears behind the dawn mist.

Next appointment with it? Who knows.