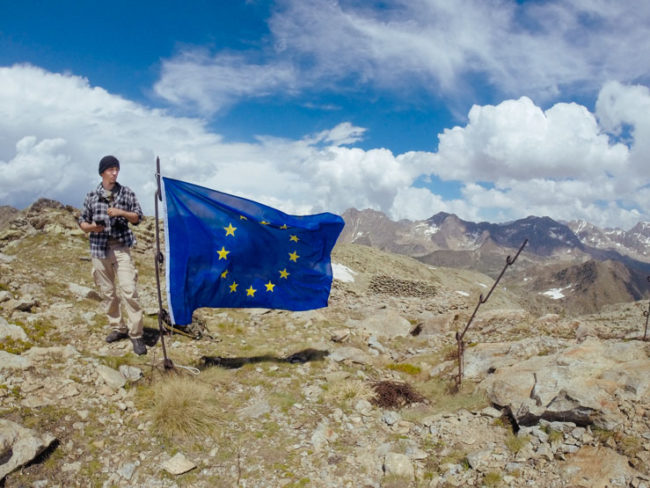 A flag raised on the memory of shed blood.

A flag and too many battlefields!

The emotions of a long journey

It’s always hard to describe emotions and feelings after a 10 days photographic mission in the most remote areas of the Alps to discover the places of forgotten bloody battles. I passed through different emotional states, I had many different thoughts while visiting the battlefields of all the continent in the last years.

I have seen from the karst region between Italy and Slovenia to the highest peaks of the Alps. From the Piave river, where Ernest Hemingway fought, to the iced forests of the Carpathian Mountains. From the concentration camps here and there to the landing beaches of Normandy or to the hell of the Balkans. Different places, different fallen but same feelings that every battlefield gives to its visitors. During this endless trip to understand what war is, I have always found a common line connecting all the places: death!

Every one of us, with a curious eye, can see traces of war all around, from the centre of his city to the remotest places.

The vice of the human being, war!

War is a vice that human being has never left behind. That vice of dividing himself in groups, to exacerbate tensions and in the end to fight. After the long process that always starts with that scream “Us First”, of hate and hostility finally the human being get what he wants: the battlefield. That place where the human being dissolves himself, through sorrow and pain, into his inexistence.

Climb up on that war peaks with me.

Along these years I collected many evidences from the ground and from people. Testimonials of horror. To understand you shall put yourself into my shoes, like in this photo. After hours hiking I reached almost three thousand meters of height. Along my way there were ghostly abandoned military structures, bomb craters, bomb splinters, rusted food cans of some fast soldier’s lunch, shoes nails and all over around barbed wire. I reached the border between Italy and France, where they fought in June 1940 and then fiercely again during 1944 between the French Liberation Army and the Fascist and Nazis troops.

Today around me it is an exquisite peace and quietness. In the valleys French and Italian people live peacefully together. There are no guards, no outpost. The only things visible about the border are the greeting panels on both sides.

Is it pure chance?

Nothing of all this is by chance. It is strictly due to the slaughter of the two world wars. It is due to those explosions caused by that terrible cancer made by leaders pouring hate into people’s minds trying to conquer and destroy the neighbours.

It is due to that extreme will, that the founders of the Union had, of ending all the sorrow of two world wars.

Thank to that today we have Schengen that allows us to freely move between countries, being even safer thanks to the integrated police informative systems. Today we enjoy the European Union, that gives us much more than the simple French or Italian citizenship, it gives us the European Citizen status granted by the EU treaties. Thanks to that status we can work, travel, move wherever we like within 27 states (Uk goodbye).

Into the long history of the European continent, there had always been war. This happened until someone decided to stop it and started linking the people, to unify, to build a common ground and to stop the silly ethnical divisions.

Today is the time to remember the cost of peace and to understand the value of that international structure that allows us to have one of the highest living standard in the world.

Remember to not repeat it.