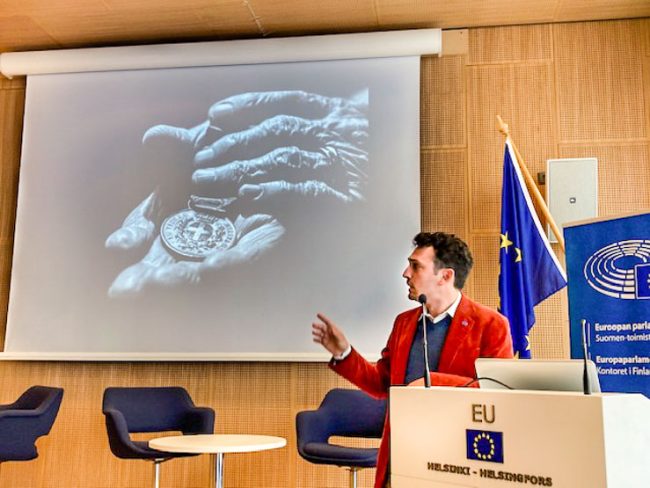 Opening at the European Parliament hall in Helsinki

European Parliament in Helsinki: Opening of the exhibition at Eurooppasali

“Here they fought!” opens at the Eurooppasali of the European Parliament in Helsinki. It is an important milestone as it reaches the 30th stop and the sixth European country of exhibition.

The exhibition is part of the official program of the Europe Day celebration of the 9th May in Finland. The opening took place on Friday 5 May at the presence of the authorities of the European Parliament in Finland and the Eurooppalainen Suomi association. It was organised with the cooperation of the Italian Institute of Culture in Helsinki.

Opening the exhibition at the “European Hall”, Eurooppasali, of the European Parliament in Helsinki was exciting and important. The European Parliament is the largest democratic institution in the world, to use the words of our President of the Republic Sergio Mattarella. Yet we take it absolutely for granted or worse we ignore it at all.

Which is the connection with ‘Here they fought’?

To realise this reportage I crossed 11 states. I crossed countless times the internal borders of the Union and once the external ones. I have seen and experienced first-hand the scars left on the ground by two world wars.

The first country outside the European Union that I visited for the reportage was Ukraine. Already in 2017, looking for the fallen of the Great War in Lviv, I came across the graves of the young Ukrainian of our times. Almost all of them died at the age of twenty defending their country from the Russian aggression.

We forgot the horrors of war. Forgetting may help moving forward great traumas. However, there is a point beyond which forgetting can get the risk of falling back into the trauma.

We live so much freedom, enshrined in constitutions and treaties, that we no longer even realize it. The European Parliament was created as highest direct representative institution of the European people. The purpose was and is to prevent them from shedding blood.

Directly elected by the people, the political groups within it are divided not by nation but by political affiliation. It represents almost 450 million people.

The European Parliament is the greatest evolution of that process of integration between peoples that has developed since the end of the Second World War. A process started with the creation of the ECSC, European Coal and Steel Community, precisely to prevent the Saar and Ruhr mining areas from recreating the basis of new wars.

The Schuman declaration announcing the ECSC happened the 9th May 1950 and nowadays the 9th May represent the Europe Day across the Union.

Winds of war started again blowing impetuously. Finland has the largest border with Russia in the European Union, 1340 kilometers. Here the anti-aircraft shelters have never been dismissed, on the contrary, there are many, efficient and operational. If we take the freedom we enjoy for granted, if we forget the cost that was paid to obtain it we are mistaken.

If you believe “the strong men” at the head of the “great nations” who protect the peoples, we are taking the highway to the grave: war.

If we open a map and we look at the nations around the European Union, just outside our borders we find:

Belarus, a puppet state. Russia, a nation that has fallen into a heavy dictatorship that attacks all neighboring nations it can attack. Ukraine, at war for its very existence. The Balkans, which experienced a terrible war not even thirty years ago and where, between Bosnia and Serbia, the political situation is worsening. Syria, devastated by war. North Africa is between dictatorships, wars and revolts.

I wonder which kind of life can have those living in these countries and in which future they cannot hope.

So what can we do?

At opening of the exhibition, Jesse Jääskeläinen, President of Eurooppalainen Suomi, who also counts fallen in his family history, closed his speech with a question “what can we do to prevent war?”

I don’t have an answer but I firmly believe that considering what allowed us to live without killing each other for over eighty years may lead us toward an answer.

Italian Institute of Culture of Helsinki