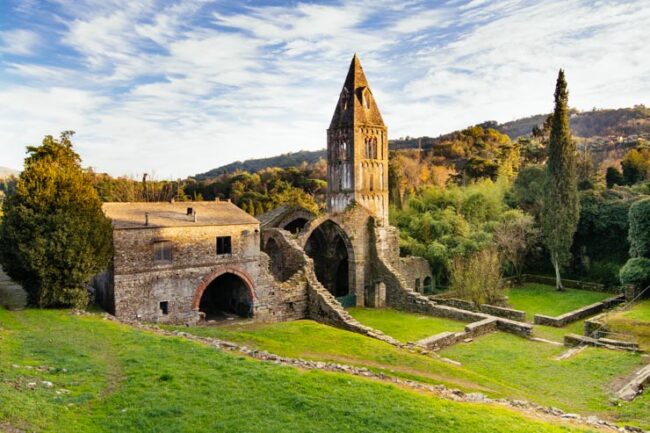 In Italy you may find a hidden pearl around any corner. Liguria is a steep region between sea and mountains enriched by an amazing history. It is here, in Liguria, that I found one of those pearls. One of the most fascinating and mysterious places I have ever visited: the ruins of the Valle Christi Monastery.

The valley one step away from the sea

Just less than three kilometres off the famous coast of the protected marine area of Portofino, there is a small valley, made of a lush greenery and crossed by a small river and a stream.

A long time ago, around the year 1100 Liguria was a vital land that gave birth to the most intrepid sailors. Genoa was a maritime power that dominated the Mediterranean. At the end of that century the Barbarossa endangered its independence. The city was reinforced with walls. Because of the fierce resistance opposed to Barbarossa the city earned the name “the Superb”. This period, however, brought internal fights, struggles and atrocious murders.

The killing of the Consul

In 1187 the Consul Angelo de Mari was killed due to those internal fights. His wife, Attilia Malfante, distraught by her pain, years later, decided to retire to religious life. A life to spend away from the turbulences of Genoa finding an area that would give her peace. This is the reason behind the foundation in 1204 of the Cistercian Monastery of Valle Christi in that valley.

Just up in the valley, a few hundred metres away, there is the Bana lazaret. It was built during the year 1450 to cope with a leprosy epidemic. Later in the years he hosted the plague sufferers. Today it still stands with a suggestive fresco on it.

Visiting these places leads us to relive the Middle Ages, until 1573, when the monastery was deconsecrated and condemned to abandonment.

Arriving today in front of those ruins means looking out on a remote and fascinating past. Among those ruins that stand out in the sky, framed by the green of the valley and the surrounding quietness, you can perceive history.

Today those walls are a place of culture. Concerts and theatrical performances are held in the Ligurian summers in a suggestive atmosphere of other times.

For any additional information about the cultural events, refer to the website of the Valle Christi association.