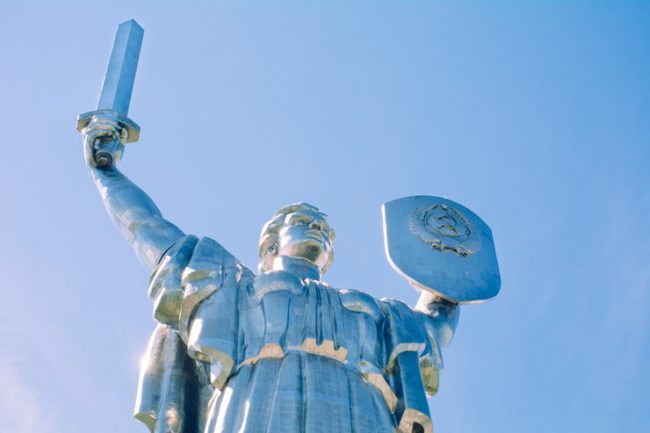 Ukraine, the end of Freedom

Ukraine, the end of freedom

My first trip to Kiev, an amazing city

In 2015 I made my first trip to Ukraine in Kiev. I was surprised in front of a city that we, westerners, don’t know much about. It is a city filled with historical monuments, UNESCO sites and over one thousand of years of important history. A capital that was looking for its freedom.

One monument caught my attention, the controversial statue of the motherland victory. It’s a soviet monument of impressive dimensions that stands tall and violent in the Kiev’s sky. It’s a woman made of titanium, 62 metres tall, even 102 if we consider its base.

In one hand the statue holds a shield with the communist symbol on it. The other hand holds a 16 metres tall sword.

Her sight, harsh and threatening, faces the Western Europe.

That statue refers to WW2 but it was put up only at the beginning of the eighties by the soviets. That statue offer s a feeling we are not used to: oppression. It’s huge, aggressive, violent and it stares directly at our countries.

It’s impossible to not make a comparison with the Statue of Liberty in New York and difference of philosophy behind the two statues.

In Kiev there was a huge dabate on keeping it, modifying it or destroying it.

Another monument of sorrow and oppression

Also another monument in the city represents the oppression. This time it is a post-soviet one. It is the monument of remembrance to the fallen of the great starvation ordered by Stalin and that costed an infinite amount of Ukrainian lives.

Ukraine, a Country used to sufference

Whatching the media about the incredible attack to Ukraine brings me great sorrow. The counter interests between the west and east have always oppressed Ukrainian people. A population used to live between fake hopes of peace.

This Russian attack is the son of an aggressive politics that is an intolerable threat to human freedom. Just a few days ago the clocks went backwards a hundred years but the contemporary world is not the same as in those times.

We are now interconnected by technology as never before in the human history. if war has always been unjustifiable, nowadays it is also inconceivable. Perhaps it is not unconceivable for a rich man that comes from the past that the statue is representing perfectly: horror and sorrow.

A dreadful past that comes back

The dreadful past and the horror that I perceived when I visited the former soviet countries and the stories that I have heard from the people that lived during those times.

From Ukraine, Poland to the Baltic Republics and Finland wherever Russia passed, it left behind only death, sorrow and violence. We hoped and lived the illusion that that was the old Russia but we were wrong. We all woke up and that awakening was a bitter one.

I my life I had the chance to meet people from all over including Russian and Ukranians. All the ones I know reject firmly war. A war that comes from the mind of a sick man with a mind not anymore in line with the real contemporary world.

I truly hope freedom and peace will prevail.

Here the link to the gallery I prepared after my trip to Kiev.